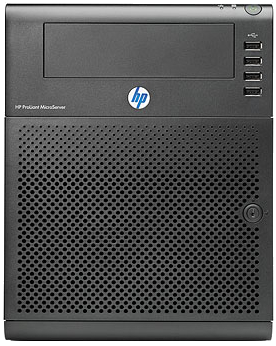 Way back in February 2012, I bought an HP ProLiant MicroServer N40L to store my backups and other files. I installed 8 GB of ECC RAM, and a set of 2 TB Seagate Barracuda drives. For the OS, I used FreeNAS so that I could take advantage of ZFS. The server was great, and ran flawlessly until about 2016 when some of the disks began to get SMART errors. I shut the server down until I could order some replacement disks, but never got around to it. The server has been gathering dust ever since.

In the meantime, I've been making do with a Backblaze subscription. It's convenient and the price is reasonable, but it's not available for Linux. Therefore, I've been running it on my old Windows gaming PC. I'd prefer to have less Windows in my life, and the Linux-friendly alternative services like Backblaze B2 and Amazon S3 are expensive for large volumes of data. I decided it was time to resurrect the MicroServer and manage my own backups again.

The MicroServer had been stored well for the last 5 years, and was still in working order. I bought four 4 TB Seagate IronWolf drives to replace the old ones. At $170 AUD each, they're more expensive, byte for byte, than the equivalent Barracuda. However, they're "proper" NAS drives, they don't use SMR, and they come with a 3-year warranty. They should last a long time. If they make it past 4 years, they'll have saved me money compared to a Backblaze subscription.

But which OS to run? I'm over FreeNAS. ZFS was a chore to set up for the first time, and I've long since forgotten how to configure it. I don't need most of its features, so I want something simpler.

I initially planned to install an SSD in the MicroServer's optical drive bay and run Fedora Server with the disks configured in a RAID array. However, I discovered that the only available power option for the SSD would be through MOLEX, and they seem prone to failure.

After looking for other options, I found Unraid, a commercial Linux distribution for network storage, among other things. It runs off a USB stick, just like FreeNAS did - perfect for my server. Unraid achieves redundancy through parity disks, similar to RAID 3. Unlike FreeNAS, the disks are formatted with a standard Linux filesystem like XFS or BTRFS. If the server ever dies, it will be easy to recover my data from the disks.

The Unraid installation and configuration was dead easy. The web interface is intuitive enough that I was able to configure nearly everything without having to refer to the documentation. Looks like a winner. My only real complaint is that the default settings are very insecure: a fresh install has no root password, and yet SSH, Telnet, and FTP are all enabled. Additionally, the contents of the Unraid USB stick is shared publicly over SMB! This can all be fixed by the administrator after installation, but it's very unusual. Luckily, the upcoming 6.10.0 release will correct these security shortcomings for new installations.

For now, I've configured my array with 2 parity disks and 8 TB of storage. This should last a good while, and the extra redundancy won't hurt. When I outgrow 8 TB, I'll convert one of the parity disks to bring the total storage to 12 TB. And since Unraid doesn't require that all disks be the same size, I can eventually upgrade the array one disk at a time.

Now I can cancel my Backblaze subscription… but I may start using Backblaze B2 as additional insurance for my most important files, just in case the whole house ever burns down.